In our Sunday School lessons we are asked to do it all the time. We are constantly asked to explain the invisible.

For instance, just recently I had to explain God living inside us. Yup, the idea of the Holy Spirit living inside of a person? Let’s explain that to a first grader :/

Now before we go any further I want to make clear. I am not saying this idea doesn’t need explained. In fact, it should be. It’s just that, out of all the things in the Bible to explain to a first grader I don’t know that I’d choose this one in my top 50.

But…backing up a step, I might be overdramatizing this just a bit.

My lesson from the curriculum was to teach on the tabernacle. Specifically, what happens in the last part of Exodus when Moses is told by God to build a place where God can dwell among His people. (Exodus 25:8)

This is all well and good, and very ‘visible’. We have pictures and other visuals that can help us describe the tabernacle of the Old Testament.

But the power of this idea is that the tabernacle still exists today. Expect it is no longer a tent, it is inside of every Christian! A part of God is in us. We are little miniature ‘temples’. (1 Cor. 6:19)

I had to explain to a bunch of kids what is inside of every Christian, yet completely invisible. Not only that, but this concept doesn’t even affect any of the five senses. It’s not like you can ‘taste’ or ‘smell’ or ‘touch’ the Spirit. It all happens inside of us.

So here’s the way I handled it:

I Described the Visible Part First

It doesn’t take much Googling to find images you can use of the Old Testament tabernacle. In fact there are some really cool ones I found pretty quickly. 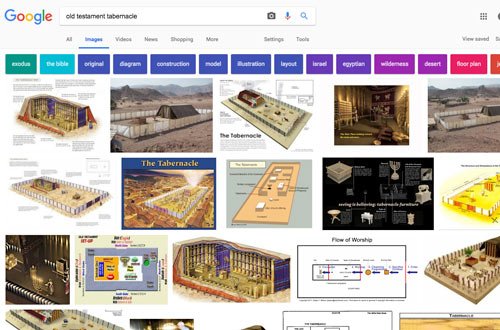 So this is where I started. I described what the kids could see: a tent, with lots of different furnishings.

The Israelites had plundered the Egyptians when they left and now they were going to put all those ‘spoils’ to good use. So they built a temple according to God’s specific instructions using the materials they had brought with them from Egypt.

I didn’t feel like it was necessary to go into each of the tabernacle rituals. Although certainly meaningful and interesting it would have just been information that didn’t serve to drive home my main point. I tend to steer clear of that kind of stuff.

Information is good if it serves to drive home my main point. But information, just for the sake of information is…just more information. (and can get boring for kids pretty quickly)

So the key here was the transition. If I could move from the visible, the Old Testament tabernacle, to the invisible, the tabernacle inside us I had a chance of explaining this big idea to the class.

When the veil, that closed in the Holy of Holies, was torn, that released the presence of God and allowed it to live inside of us. So I made it a point to end my initial comments on the tabernacle with the veil. Something they could see in the diagram. That way, I could transition from the veil they could see in the picture, to something they’d have to use their imagination to create, God living in us.

I Used Super Heroes to Help Me

Now let me admit right up front that I am not into lame illustrations. So if I am going to use Super Heroes to help in my ‘invisible’ explanation it better work really well.

Here was my logic:

Superheroes start out rather normal. The Green Lantern, Superman, and Ironman all start out as pretty normal people. Before they turn into Super Heroes they are everyday people with no special power.

In fact, the only thing that makes them special is the access they have to a special power. Without the ring the Green Lantern isn’t so special. Without the suit of armor Iron Man doesn’t even exist.

And the same is true of us!

We are average. We are even below average. A bunch of no good sinners.

But then God rescues us, through salvation, and gives us His supernatural power. God gives us the Holy Spirit who lives inside us.

In a very real sense, we go from just an average ‘joe’ to something amazing, like a superhero. We go from simply being human to being injected with the Holy Spirit, the most powerful force there is!

I like this illustration because kids immediately get it.

The next time you need to explain the invisible start with what you can see, and then move to an analogy or illustration that demonstrates the ‘invisible’ idea you are trying to communicate.

This method helps kids connect the dots between what they understand and what you are trying to communicate.