My wife is a genius. She gets all the credit for this.

I have a rather adorable 3-year-old boy named Nolan. (sometimes I feed him food his mother wouldn’t approve of!) 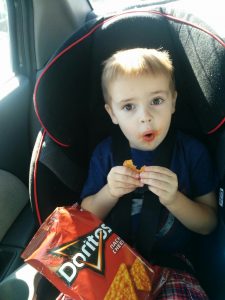 We want Nolan to memorize the Bible. But sitting in front of him saying a verse over and over again is a completely futile effort.

Is it because I’m a bad parent?

What my wife discovered, and I’m very thankful for is that the answer to our Bible memorization problems are solved…musically.

So my wife discovered Genesis 1:1 as a song!

Nolan listened to this off and on for 2 days and had the verse totally memorized.

I can’t even tell you how amazed we were. Even several weeks later Nolan still has this verse down cold. It’s rather amazing.

So the next time you want to get Scripture into a child’s head…find a cool YouTube video that puts the verse to music.

It worked wonders for us!