Bring the kids outside to sit under a tree for this lesson, if possible. If there are no trees available, just find a grassy spot outside to sit. Have everyone, including yourself, sit on the picnic blanket. Give each child a few golden coins.

How many of you have ever heard your parents complain about taxes? Taxes are never something good. In fact, there’s an old saying, “the only two things certain in this life are death and taxes.” That means that people hate taxes so much, they compare them to death! Why do people hate taxes? (Take answers from kids)

Well, every day, your parents go to work and earn money. They bring money home. But they don’t bring home everything they make… You see, your parents might make $20 in a day, but they only actually bring home $18. Where does that other $2 go?

Well, it goes to our government, who uses it to pave roads and fund schools and libraries and help people who need it. You use the roads and the schools and the libraries every day, and you probably think of them as “free” to use—but really they cost your taxes. But it would obviously be really hard to have to pay every time you use a road or a library, so we just pay a big fee to the government every year, and then voila! We can use all these things. So the reason everyone hates tax time is that’s when the government decides how much money you have to send in. Sometimes, they end up saying you owe even more than you already sent in—and that’s where it becomes something everyone hates!

Well, the guy we’re going to talk about today… he had a LOT to do with taxes back when Jesus was around. And he was HATED! I don’t just mean disliked, I mean HATED! You know why? He was a tax collector!

His name was Zacchaeus, and his job was to collect taxes in his town… Which sounds like an awful job, but it was even more awful then. You see, the tax collectors were always rich… and the people were always poor… and there never seemed to be enough money for the government to take care of stuff. Any idea why that was?

So in comes Zacchaeus, the tax collector. The government has told him to take 2 gold coins from each of you. (Take 2 coins from each child). That stinks, but you expected it, right? You thought about it when you planned what you were going to do with those coins. Surely nobody would really hate Zacchaeus for that, right?

Well, let’s say the next day, Zacchaeus comes back. “Give me two more gold coins!” he says. You’re upset! You already paid your tax! How can you afford two MORE gold coins? You can’t, but you’re afraid what will happen to you if you don’t pay. They might put you in jail, or hurt you! So you pay up. (Take two more gold coins from the kids).

Now, what was common practice then is that the tax collectors would come and say your tax was four gold coins, when really it was only two… and then do you know what they’d do with your extra money? They’d pocket it. That’s how they became rich, and everyone else became poor… and that’s why everyone hated Zacchaeus. Whether he did this or not, he was part of the rich group that took advantage of the poor, and he was hated.

Well, one day, Zacchaeus learns that Jesus is coming to town, and he wants to go see him. But it is so crowded, and Zacchaeus can’t see. Nobody’s going to let him get closer… So you know where Zacchaeus went?

So Zacchaeus hopped into a helicopter and took off!

(Point up in the sky)

He hopped into a helicopter!

He went up in a tree! He climbed up the tree and figured if he could get up high enough, he could still see Jesus as he passed by. So he’s hanging out up in the tree, everyone below him is crowding around to see Jesus. Jesus walks down the road and he stops right under the tree. How embarrassing would it have been if Zacchaeus fell out of the tree at this point!!??

Good thing is, Zacchaeus didn’t fall out of the tree! But he totally could have with what happened next! Jesus stopped right under the tree, looked up, and said, Zacchaeus, I’m coming to your house tonight. Get out of that tree!’ 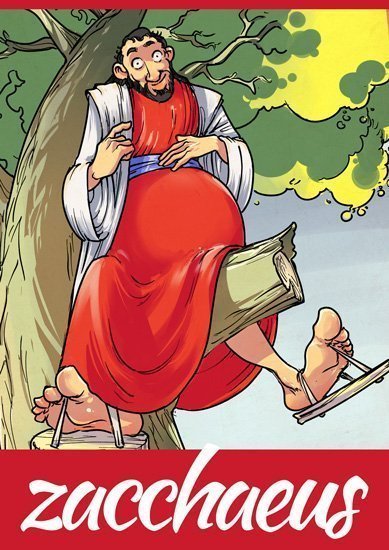 Zacchaeus, and everyone else, was flabbergasted! They didn’t understand why a good guy like Jesus would talk to a bad guy like Zacchaeus… and why Jesus would want to spend time with Zacchaeus, either! Zacchaeus was an evil tax collector after all!!

But Zacchaeus welcomed Jesus to his house, and they sat down and ate dinner together.

Jesus showed Zacchaeus so much kindness, and he saw goodness in Zacchaeus when everyone else only saw bad. As a result, Jesus changed Zacchaeus. By the time they were done eating, Zacchaeus had repented of what he did wrong. He vowed to help people who were poorer than he was, and to give back what he had stolen from them. (Give kids back their coins, plus a few more each)

You see, Jesus didn’t come to earth just for the good people. He came to earth for ALL of the people. People like you and me!