Explaining sin to adults can be difficult…but try explaining it to KIDS!

So to make things a little more interesting, and to help them really “get it”, why not use an object lesson?

When you have a difficult subject, like sin, an object lesson can be the perfect conduit for explaining something difficult in a simple way.

The following object is a “magic trick”, and if you’ve been following me for any length of time, you know that I’m a fan!

I think magic tricks are cool because they have an element of surprise to them, and the kids are almost always impressed.

And I mean, come on— who doesn’t want the kids to be at least a little impressed?

So the idea here is that you break the toothpick and then it is magically restored again. Watch this video to see how it’s done:

“When we sin or do something that God doesn’t like, we break our relationship with God. In other words, when we do something wrong our connection to God is broken. No matter how many good things we do afterwards, we can never do enough to make up for what we have done wrong.

It’s kind of like this toothpick. I’m going to put it in this napkin and roll it up.

I want you to feel the toothpick in the napkin to make sure it’s there.

Now I want you to break the toothpick for me.

Just like this toothpick is now broken, when we sin our relationship with God is broken.

But– God has made a way for us to fix our relationship with Him!

God sent Jesus, His Son, to come to this earth to die for our sins.

That’s just like the toothpick– it was once broken, and it’s now completely whole again.

When you accept Jesus into your heart and ask Him to forgive your sins, your relationship with God is fixed,  just like we fixed this toothpick.”

What qualifies a sin as a sin? And who decides what sin is?

Those are the sorts of questions your students may have.

Of course, the answer to them can be found in the Bible. You can find plenty of definitions of what sin is in God’s book.

These definitions can be summed up into simple phrases like: “missing the mark, breaking God’s laws, or “anything you say, think, or do that breaks God’s rules”.

However, since most kids need examples that they can VISUALIZE, try explaining sin with everyday objects and examples.

What is sin, and who decides what sin is?

God is the ultimate authority when it comes to what is sin and what isn’t.

In Judges 17:6, the Bible says that (during the time of the judges):

“In those days there was no king in Israel. Everyone did what was right in his own eyes.”
Nowadays, plenty of people want to do what they think is right. However, the Bible says that “our ways are not God’s ways.” (Isaiah 55:8-9)
We don’t think the way God does, so what we think might NOT be a sin could be a sin in God’s eyes.
That’s why we need to look to the Bible to find out what IS a sin and what ISN’T.
When you teach your students about sin, be sure to emphasize this thought:
SIN isn’t what I decide it is, but what GOD decides it is.
If everyone just did whatever they feel like, the world would be chaotic! That’s why we have rules and laws that the government puts in place.
And God is our ultimate authority. He is the King of Kings. He sets rules in place so that there is order instead of chaos.
To drive this truth home with your students, have them play a board game— but WITHOUT ANY RULES.
Every man for himself! Everyone can do whatever they want! Anyone can make up whatever rules they feel like!
Imagine how that’s going to turn out…. 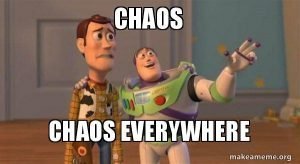 Exactly. And that’s why WE can’t decide what’s right and wrong. Only GOD can.

What are some examples of sin?

Kids need to hear plenty of examples of what kinds of things are considered sin by God. When you want to give examples of sin, first it’s a good idea to share some Bible verses that specifically mention things that God forbids.

Just like we would check our country’s laws to find out what’s prohibited, we have to read God’s laws to know what actions are sins.

For example, the Ten Commandments is a good place to start. (Exodus 20)

Colossians 3:5-6 says that we should get rid of anything that is part of our earthly nature:

“Put to death, therefore, whatever belongs to your earthly nature: sexual immorality, impurity, lust, evil desires and greed, which is idolatry.”

And, James 4: 17 says that if you know about something good you should do and you decide not to do it, that’s a sin.

“If anyone, then, knows the good they ought to do and doesn’t do it, it is sin for them.”

It’s a great idea to ask kids for examples of what kinds of things they think are sin. They will most likely say things like “lying” and “stealing” and “hitting my brother”.

Those are things that most non-Christians would agree are “bad” because they grew up hearing their parents say so. And yes, those are sins. But there are also many other things that go against God’s law too!

Nevertheless, the world tends to believe certain lies about sin, like the following:

We MUST teach kids that they need to open THE BIBLE to find out whether something is a sin or not.

They can’t rely on what the TV, the school teacher, or even Mom and Dad to tell them, because GOD is the one who makes the laws. He decides what’s right and wrong, even if we don’t agree with what He thinks.

And, if they are tempted to do something but aren’t sure whether it’s a sin or not, it’s better to AVOID IT.

Here are some illustrations/object lessons to use to reiterate that point:

So, before you make a decision about whether something is a sin or not, and before you decide to do it or not, ASK GOD!

Are some sins “worse” than others?

This question is bound to come up in your Sunday School class at some point.

Are there little sins and big sins?

The short answer is no, sin is sin. James 2:10 describes all sins as being equal:

“For whoever keeps the whole law and yet stumbles at just one point is guilty of breaking all of it.”

Every sin and any sin separates us from God.

I do have to say that sins can be different in their earthly consequences. For example, it’s obvious that killing a person has a much BIGGER impact and BIGGER consequences than, say, talking back to your mother.

That being said, even talking back to your mother one time has eternal consequences– it separates you from God. Even a “little” sin makes it impossible for you to enter into God’s perfect heaven.

That’s because God is perfect and holy– He can’t be around sin. He can’t let even one “little” sin into His presence, and into heaven.

You can illustrate this by putting just one drop of food coloring into a glass filled with clear water. It was only one little drop, but now the water is no longer clear. It doesn’t matter how many drops you put in– even one will spoil it.

So out goes that theory of “well I haven’t killed anyone, so I guess I’m going to heaven…”

And that brings us to our next question…

Is everyone a sinner?

According to Romans 3:23 and many other verses, YES.

“For all have sinned and fall short of the glory of God.” (NIV)

I like the way the NIV translates this verse, because we get a good picture of what sin is: falling!

We just can’t measure up to God’s holiness, no matter what we do.

But…what about those kids who don’t believe they are sinners?

Every now and then you’ll have kids who simply don’t want to admit they’re sinners.

Instead of asking, “well, have you ever (list of sins)?” try showing them an illustration like the one above. Share verses like Romans 3:12 and 23 and, and leave it to God’s Word and the Holy Spirit to convict them of their sin.

Explain that God demands absolute perfection in order to allow us into heaven. Otherwise, heaven wouldn’t be a perfect place, and no one would want to go there! In addition, God can’t live around sin, because He is holy.

So, even just a little imperfection won’t make the cut.

If a child still won’t accept that he’s a sinner, try praying for him or her, and discussing it again at a later time.

Whenever you talk about sin in your Sunday School class, don’t end the lesson without talking about the hope we have in Christ!

Yes, sin is a terrible thing, and has terrible consequences– but that’s not the end of the story.

Even though we fall short– Jesus made a way. His sacrifice on the cross is like a “bridge” over the gap.

Through Jesus, we can have victory over sin, and enjoy the benefits of salvation.

For more tips on explaining sin and salvation, read Salvation for Kids- A Script to follow for Sunday School Teachers or anyone who is talking to a superhero loving child.